I am blessed to have a son that is as interested as I am in fishing, hunting and being in the outdoors. Lane has always been interested in it, probably in part due to the fact that I started taking him fishing when we has about 18 months old. Over the past few years his interest in fishing and hunting has grown a lot and he has become what I would call “hardcore”.

I committed to taking some time off over the holidays to get him out on the water and catch some blue catfish and he wanted to catch a junior angler record blue catfish on one of the North Texas area lakes.   Over the past week Lake Lewisville and Eagle Mountain Lake had not been producing any good numbers of big catfish so we set off to Lake Worth to catch some big catfish.

On arrival at the lake a friend called and informed me his son had landed a new junior angler lake record blue catfish of 37 lbs about fifteen minutes prior. We headed off for our day of fishing and ended up the day with a 36 lb blue for the biggest fish, just one pound shy of the junior angler record caught earlier that day and had that fish not been caught he would have had a fish in the record books. Pretty disappointed we headed home.

Two days later on December 23, 2011 we snuck out for some quick afternoon catfishing on Lake Worth with plans to catch some trophy blue catfish. We arrived at Lake Worth and set up for some fishing and after a short while hooked into a fish. When the Team Catfish Thunder Cat Catfish Rod doubled over in the water I knew immediately that it was a good fish but I didn’t know how good. A few minutes into the fight the boat turned into the wind and I realized the boat was being drug along by this fish I had a much better idea what kind of fish this was. It takes a pretty good catfish to move the boat into the wind in that kind of wind.

A short while later I netted a monster catfish and put it on my scales, getting a weight of roughly 66 lbs on my digital scales. I immediately realized the fish was at least a junior angler record so I put the fish in the livewell of my Xpress boat and headed to find certified scales. This proved difficult as it was 4:00 in the afternoon on a holiday weekend. We finally found certified scales and had the fish weighed.

Lane’s 66.28 lb blue catfish is being submitted for the following record on Lake Worth.

I couldn’t be more proud of Lane and this was the best Christmas present I could have received.

This is the best time of year for catching trophy class catfish on rod and reel. If you would like to book a fishing trip give me a call at 817-522-3804. 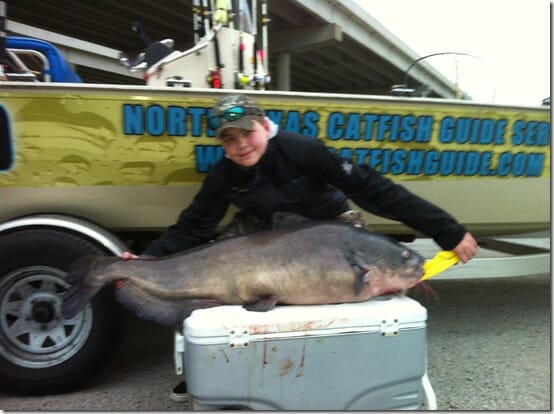 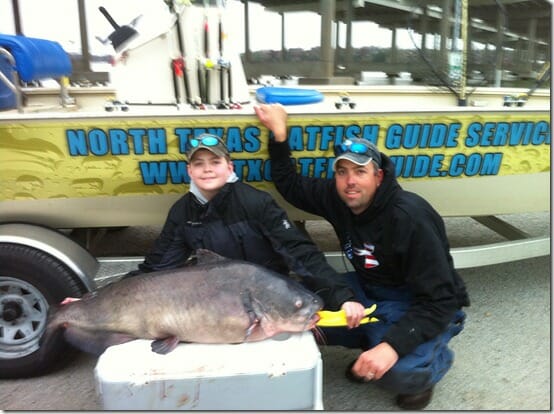