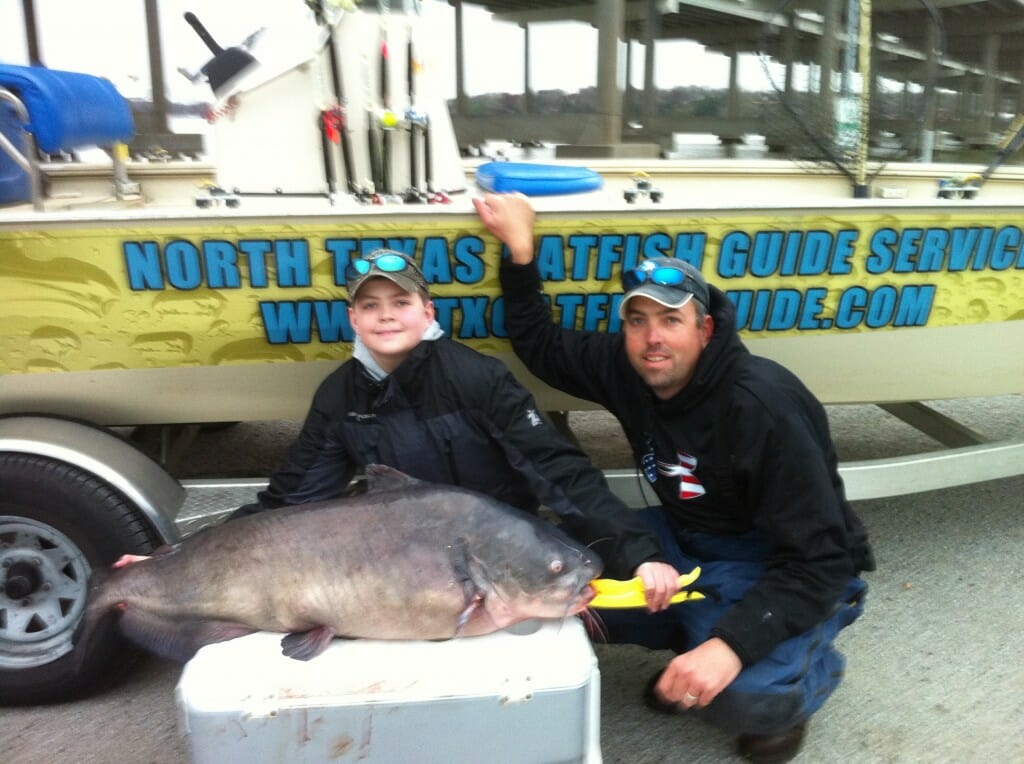 Lane Ferguson, 12, of Fort Worth, Texas, got an early Christmas present when he caught a 66.28-pound blue catfish from Lake Worth on Dec. 23.

Lane, who required less than 10 minutes to land his record fish, has a leg up in the catfish records department. His father is Chad Ferguson, a Dallas-area fishing guide (txcatfishguide.com). Ferguson specializes in big fish and expects his son to set other records in the Dallas area. Here’s a question and answer session with Chad Ferguson about catching catfish:

What are your favorite catfish lakes?

I stay pretty close to home. I primarily fish at Lake Worth, Eagle Mountain and Lewisville this time of year but will occasionally hop around to Grapevine and Ray Roberts.

Lewisville has a lot of big blues. Eagle Mountain has good numbers to 25 or 30 pounds, but we don’t catch really big ones there, yet. I think guys get caught up in the hype and think they need to travel to lakes with reputations for producing monsters.

How long does the big fish season continue?

You can catch big blues all year, but they’re tougher to pattern in warmer months. I usually start focusing on big fish in mid-October, and the bite is usually consistent until mid-March. My favorite time is late January and early February. That’s when we seem to catch the biggest ones.

How do you rig for blues?

The majority of the time, I fish with a slip sinker rig or a Santee rig. The difference between the two is a small foam peg on the leader for a Santee rig, and I make my leaders a little longer than most anglers. You can learn these rigs online at learntocatchcatfish.com.

What’s the most productive bait?

Fresh shad. It must be fresh, no exceptions. A lot of people try to cut corners and fish with frozen bait or grocery store baits, but fresh shad will outfish them all day long.

Do you anchor or drift?

I do both. Different times call for different approaches. It depends on what I’m seeing on my sonar. I use the Humminbird sonar and side imaging to locate big blues and determine my approach from there.

What’s the best single day of fishing you’ve had for big fish?

I’ve had a few that were unreal but they don’t happen often. Years ago at Cedar Creek Lake, my friend and fellow guide Jackie Kennedy and I fished in late January and caught 25 or 30 big ones.

One other time in January, we managed over 30 trophy-sized fish at Lewisville.

You’re a proponent of releasing big catfish. Do you see more anglers releasing the big ones?

I think so. It’s becoming much more accepted. Most hardcore catfish anglers are releasing all the big fish. I’d like to see TPWD expand slot limits and start developing trophy fisheries all over the state.

The catfish is the No. 2 Texas game fish, and the sport is growing rapidly.